There were only a couple of manufacturers at CES 2008 displaying OLED TVs though there was significant buzz around the products.

Sony showed their new model OLED TV XEL-1. This is the first OLED TV to be sold in America. The display contained around 15 of the OLED displays with differing computer generated high definition images. I was impressed with the color depth and black level for a screen with only 3-millimeter depth. As well, the picture is very bright which is a big plus to complement the stated 30w peak brightness power consumption. And lastly, I don’t know that I have ever seen a screen that combines such brilliant, vibrant color with realism. 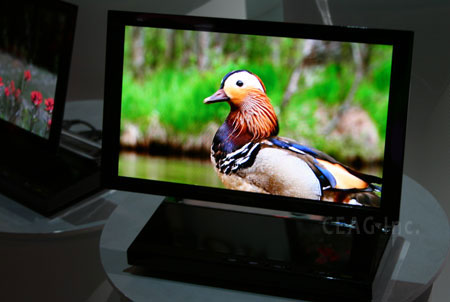 Aesthetically, there is a strange stand that the OLED mounts to which has the inputs. The bezel is black (and silver) and there is a diagonal arm connecting the OLED TV screen to the stand. I believe this stand, arm, monitor connection is due to the need to have a separate input device to allow for the 3 millimeter panel. If so, this is slightly misleading as there is no way to mount the monitor to the wall. Hopefully, Sony will be able to work out this design/engineering challenge for as the OLED TVs get larger, users will want to mount them for a super slim appearance. Otherwise, what’s the use in the super thin bezel? There are 2 HDMI input terminals in the XEL-1 which has a native resolution of 960 X 540. Though this is not an extremely high resolution, on an 11 inch diagonal screen the pixel density appears very tight. 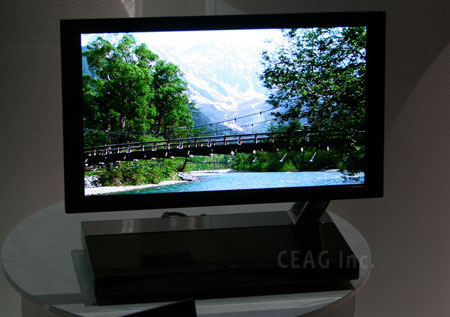 Sometimes it’s difficult with computer generated high definition images to discern the quality of a display, but I noted that the viewing angle was a perfect 170 degrees as claimed. Images displayed did not move side to side so there was no way to determine whether these OLED televisions had motion lag or blur. Although the screen was only 3 millimeters, there is a wallet sized addition to the back of the panel which increases the depth of the TV by another 5 or 6 millimeters.

Since we did not test the OLED with our own equipment we will wait for another time to write a full review with ratings comparing the screen picture quality with LCD and plasma.