[an error occurred while processing this directive] What is OLED TV (Technology)? OLED and AMOLED TV Technology Explained

One of the major differentiating components of OLED TV technology compared to other technologies is the way in which the OLED (organic light emitting diode) panel or screen produces color information. It differs tremendously with LCD and LED technology which use an LCD panel with twisting crystal and a backlight for lighting the colors. Surprisingly, this relatively new technology produces color in a what closer to the phosphor production in a plasma TV. AMOLED refers to (active matrix organic light emitting diode) TFT (thin film transmitter) technology found in most OLED TV screens today. 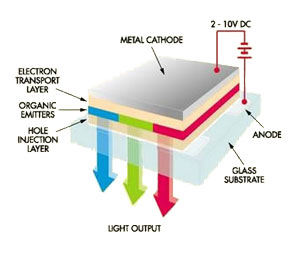 In OLED displays, each pixel contains organic carbon based compounds which produce red, green, and blue elements much the same as plasma, which work in conjunction to create the millions of colors. Insofar as each pixel contains all the elements needed to produce every color in the spectrum, color information is accurately reproduced with OLED technology.

As well OLED TV screens have near perfect viewing angle. OLEDs create light (are emissive) rather than block light. Every pixel is lit independently and that light will be seen from off axis viewing angles easily and accurately, also like plasma TV technology.

To be more specific about the way the panel is created; OLED TV panels come with either two or three layers of the organic compounds which are located in one super thin layer of the "glass". The panel is supported by a hard plexiglass material which also protects the sensitive inner materials. Remember CRT (cathode ray tube) TVs? OLED displays use a cathode layer to introduce electrons to the first layer of organic molecules.

Lastly, OLED televisions utilize slight electric currents to excite a combination of organic phosphorescence encased in a plastic substrate. OLED needs very little power to operate so in theory should last for a very long time as the parts are not taxed significantly. Here's the catch, the blue organic phosphor LED compound has a short life (a guess is 7,000 hours). The red and green material may not last more than twice as much longer. Those first OLED displays will be an experiment with regard to longevity.